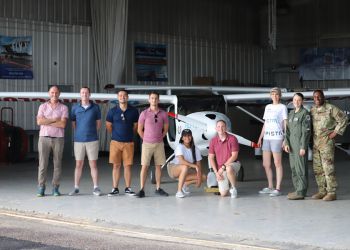 According to the Air Force, the program is “an inclusive, comprehensive, and low-cost solution to address the “warfighting imperative” of increased diversity and pilot shortage through deliberate development of the next generation of USAF officers prior to and shortly after commissioning.”

The program provides mentorship, motivation, and multi-faceted benefits by identifying and attracting high school students, cadets, and junior officers from all demographics and backgrounds, then providing them critical tools proven to increase rates of success. A.C.E. is specifically focused on promoting and developing future USAF leaders and aviators in a holistic manner (i.e., beyond aviation knowledge) and its success centers upon robust engagement with Total Force role models and mentors.

The objective of A.C.E. is for students to receive the Science, Technology, Engineering and Mathematics (STEM) and flight training needed to successfully solo an airplane, while also receiving mentorship that provides the character development and knowledge needed to succeed as a USAF or civilian aviator.

Being selected by such an esteemed institution as the USAF, is another proof that the Pipistrel aircraft are the best choice for initial and advance training, after being selected also by the Indian Air Force, Indian Navy and Indian National Cadet Corps to which Pipistrel delivered 194 basic trainers during the course of the last 2 years.