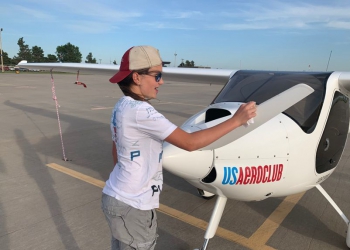 An adventure 14 years in the making….. Allow me to introduce RILEY SPEIDEL.

Finishing the school year on June 7, most of Riley’s classmates would be thinking about summer vacation, summer jobs and chasing boys, but Riley is different!

Riley left school that day and just a few hours later, at around 1.30pm, she departed on an epic solo trip flying a Pipistrel Sinus touring motorglider across the continental US. A journey of some 3,300 miles, from Marina in California to the east coast town of Sanford in Maine, and yes, I said she is only just 14, she flew the aircraft solo and she showed exceptional piloting skills, decision-making and navigation ability that was the culmination of more than two years training most of it in her father’s Pipistrel Sinus aircraft.

This epic adventure, for even a seasoned aviator, was the culmination of many years’ preparation. More than two years ago when Riley was only 12, she was training in a Piper Tomahawk and then in a Pipistrel Sinus aircraft alongside her father, Jake Speidel, a captain for United Airlines who is also a CFIG (Flight Instructor for Gliders). Now, with a total flight time of 310 hours, more than 510 landings and her first solo completed just one week earlier on her 14th birthday, she was ready for the trip.

FAA rules require that the pilot of a conventional airplane must be at least 16 years old for them to get a pilot’s license and fly solo, a glider pilot only needs to be 14. This made it possible for Riley to fly the Pipistrel Sinus on her overland adventure.

Riley however was not completely alone during her journey. Riley’s father Jake followed her in a chase plane while Riley led the way, made the decisions, navigated and communicated exclusively. Her father was flying behind just to keep and eye on his little girl and provide logistical support. You know it would be impossible for a 14-year-old to book a motel room even though she flew to the town in an aircraft herself. Jake commented after the trip that shadowing Riley wasn’t necessary because despite her age, she showed exceptional maturity in her piloting decisions. Some 200 hours of training and over 100 hours in the Pipistrel Sinus in Marina California where often there are strong crosswinds gave Riley all the skills needed to become a very competent young pilot.

Most of the trip was flown early in the morning when there was less wind and less thermal activity. Normally, Riley would fly at around 9,500 feet to clear the mountain ranges and keep in clean air.

Her trip took her from Marina to Apple Valley CA on the first day, stops followed in Arizona, New Mexico, Kansas, Missouri and Ohio. The final day she was airborne and into a 45-knot tailwind meaning she could fly from Ohio all the way to Maine in just one flight, completing the trip in just 9 days. Along the way Riley gave several talks to aviation youth groups speaking about her adventure and her enjoyment flying the Pipistrel Sinus aircraft.

The Midwest weather is certainly volatile in the middle of summer, but Riley was lucky to avoid the worst of it during her trip by flying between large weather patterns, it wasn’t something that she could plan for, it was just something that happened. The 2 days she allocated for bad weather didn’t eventuate and in just 9 days this 14-year-old had flown solo from West Coast to East, a total of 3,300 miles, consuming less than 97 gallons fuel with a flight time of 29.1 hours.